KKU holds Loi Krathong Ceremony to foster old tradition – The beautiful, simple and Covid-cautious event this year is joined by a lot of people and students

Saturday October 31, 2020 from 07:00 a.m. to 20:00 p.m. at the Art and Cultural Building (Sithan Lake), Khon Kaen University – the Art, Culture, and Creative Economy Section of Khon Kaen University held the Loi Krathong Ceremony of 2020 under the concept: “KKU conserves graceful art and culture under the spread of Covid”. The event was honored to have Dr. Narongchai Akrasanee, Chairman of the University Council and his wife Khun Orporn Akrasanee; Assoc. Prof. Charnchai Panthongviriyakul, M.D., President of Khon Kaen University and his wife, Dr. Uanjit Panthongviriyakul; and University Council members. Among other people attending the ceremony were KKU administrators, lecturers, staff members, students and the public.

The merit making by offering food to the monk began at 7:30 a.m.

Khon Kaen University Council Chairman and his wife and KKU President and his wife led the administrators, staff, students, and Buddhist people to offer food to 9 noble monks. The President lit the candle and incense sticks to pay respect to the Triple Gem and the religious ritual began. The attendants offered breakfast and the 4 necessities to the noble monks, who then prayed the blessings and sprinkled holy water to all. 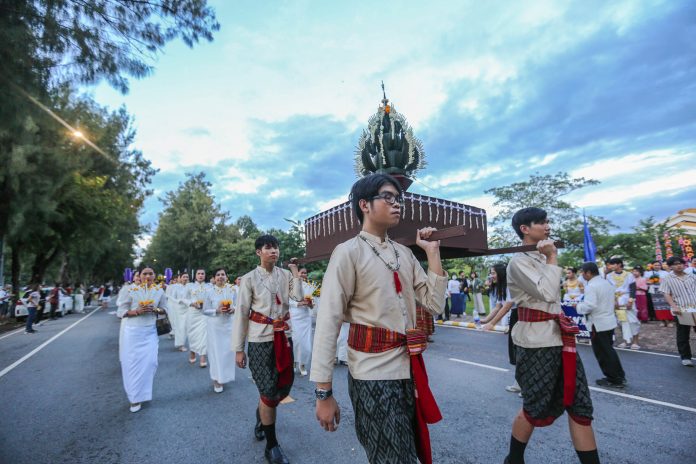 At 16:00 p.m., the procession of Buddha Relics moved from Sithan Road to the Buddhasilp Building. Khon Kaen University Council Chairman Dr. Narongchai Akrasanee and his wife Khun Orporn and Assoc. Prof. Charnchai Panthongviriyakul, M.D., President of Khon Kaen University and his wife, Dr. Uanjit along with KKU University Council members, deans of different faculties joined the procession, which was followed by the dancing procession as homage paying towards the Relics, a music-playing band, the procession of the worshipping items, the Beng trays of different faculties and other traditional processions, all moving to the Relic Containment Ceremony of Maha Buddhachai Mangalapisek Somphot Luang Pho Phra Sri KKU 50th Anniversary or Phra Sripanyasbhurithan. The worshipping items and Beng trays were then placed at the point where the Relics were to stand.

Next, Assoc. Prof. Dr. Niyom Wongpongkham, Vice President for Art, Culture, and Creative Economy invited the Chairman of the University Council, the President and the administrators to worship Luang Pho Saikhaw and look at the beauty of the major krathong. Following this was the Relics Containment Ceremony at the head of Luang Pho Phra Sri KKU 50th Anniversary, the Somma Buchanam Ceremony at the bank of the west Sithan Lake. After completing this ceremony, the administrators floated their krathongs which were made from organic materials. The grand ceremony then was opened officially. 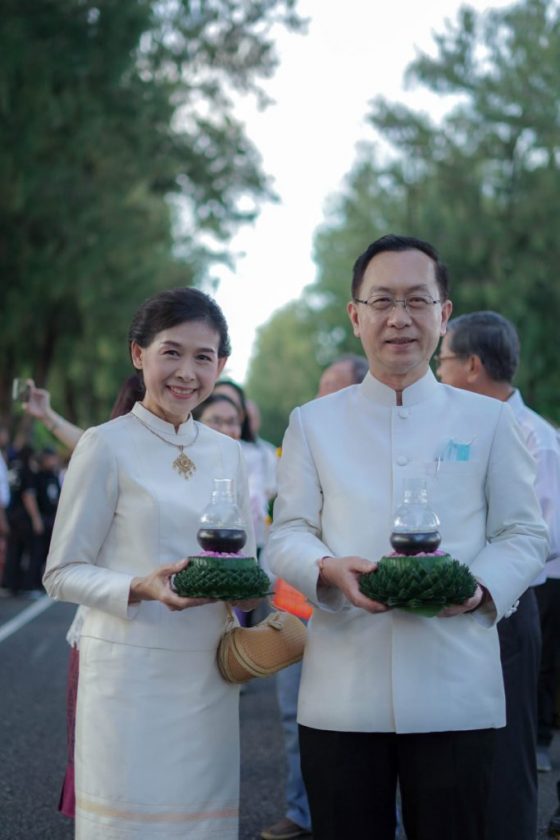 Assoc. Prof. Charnchai Panthongviriyakul said, “The ceremony this year is different from last year due to Covid-19. We have certain measures to prevent the spread of the disease. At present, the situation in Thailand is well contained. However, we have to take precautions against the second spread. Therefore, all measures are strictly taken, with all wearing masks, using gel to wash the hands and keep certain distances from one another. The national policy calls for reduction of activities where a lot of people come together, for there is a chance that the disease can spread.”

“However, Khon Kaen University has the policy to foster Loi Krathong as well as other cultural events. We used to have the Sithan Festival for Loi Krathong every year, for 3 years now with a hundred thousand people joining. This year, we want to hold this beautiful cultural event under the Covid-19 situation. So, with the policy given by Dr. Narongchai Akrasanee, Chairman of the University Council, the event has been adjusted to be simple and emphasizing the gracious tradition and culture. In the morning we held the merit making. We have brought the ground krathong that is derived from the art and culture of Luang Phrabang to decorate the place where Luang Pho Saikhaw is placed. This makes a good check-in place for people to see and take photographs. Today, we also bring the Relics, which belong to Khon Kaen University, in the procession. The Relics is then placed at the Busabok in the Buddha Image Hall for students and the public to pay homage to. The specialty this year is that we have placed some Relics on the head of Luang Pho Phra Sri in the ceremony just completed. This is another point where students and the public can come to worship. Next, there will be the floating of krathong together. The activity will be simple but preserving art and cultural tradition. The ground Krathongs are decorated with beautiful lanterns. They will be kept here for one week for those who did not have a chance to come today to see.”

“Khon Kaen University has strong intension to be an institution that preserves Thai traditions and cultures. This year, the event is held in accordance with the situation. Next year, if the situation changes, we will hold a grand event as before,” the President said. 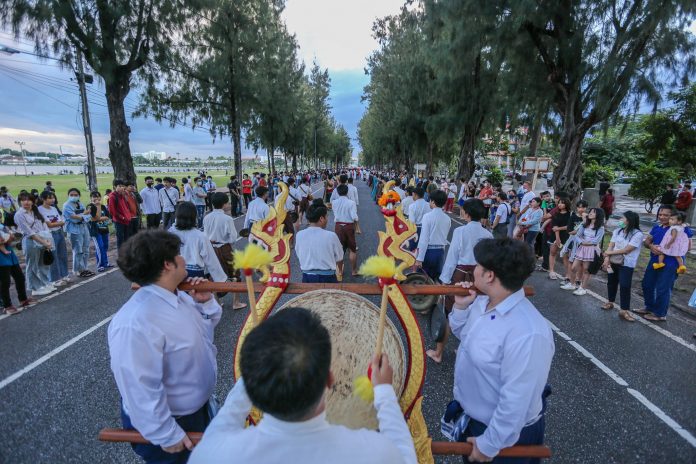 Miss Saowapa Pankaew, a 3rd year KKBS student said, “Last year, the festival was held at the other lake. There were a lot of people and a lot of shops. This year we see the picture of culture preservation and the difference from last year. I am impressed by the activities, for example, there are songs sung be the elderly. Today, I come to see the atmosphere. I’m not floating Krathong, for many people are doing it. I don’t want to add to the garbage, for there are news about the impact from Krathong garbage. Coming to the event is already good.”

Miss Kamonwan Songkramyut, a 3rd year student of Faculty of Fine and Applied Arts and Miss Paritta Chalaemchat, a 2nd year student of the same faculty came in the dancing attires to perform in the Boon Somma Bucha Nam Dance. “We perform the dance every year. This year I performed as a Naga named Niang Niah. Even though the ceremony is not as grand as last year, it is simple and still nurtures the culture.”

The Loi Krathong Ceremony of Khon Kaen University had been adjusted to reduce the activities from the former Sithan Festival because of the situation of the spread of Covis-19. However, the major event like the procession of the relics KKU has and the new-normal Krathong floating were still held. Most of those who joined were dressed in Thai costumes or in dresses made of Thai cloth. They were aware of the Covid-19 and wore masks and kept social distancing. They also brought their own Krathongs to float. The event was arranged beautifully this year. 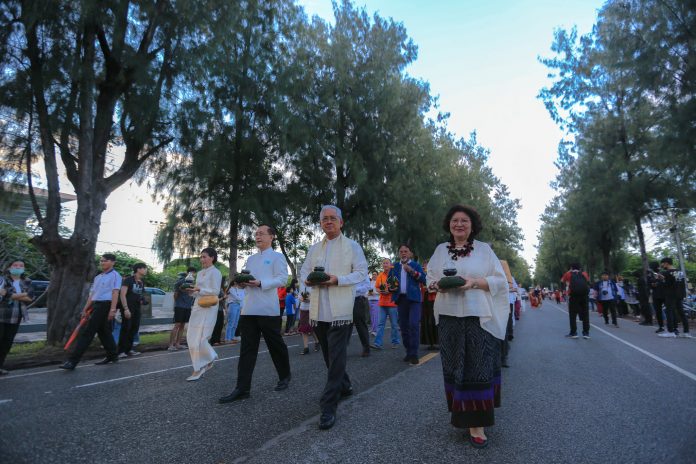 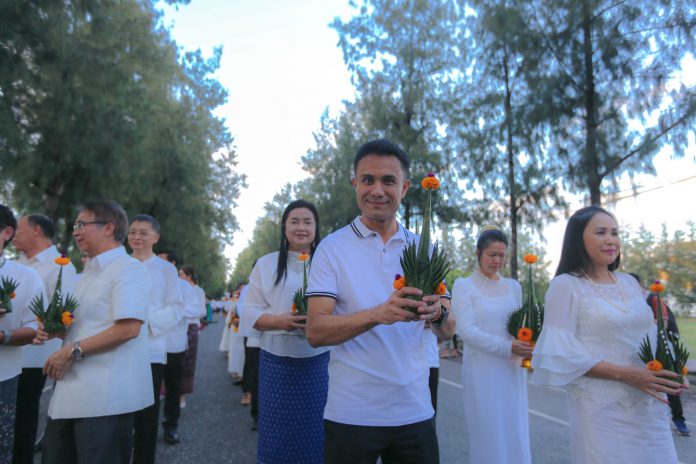 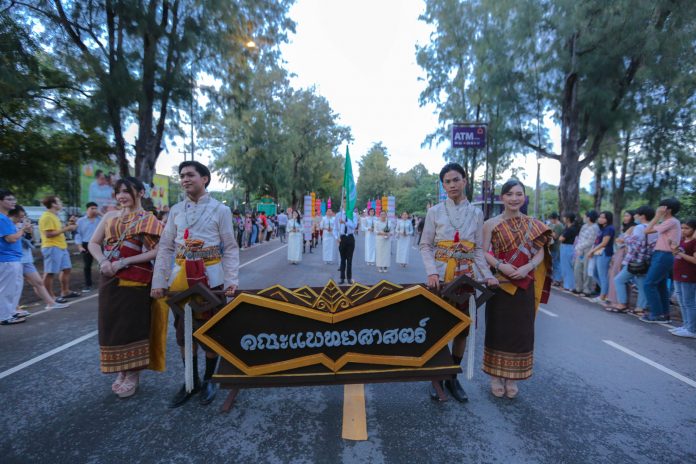 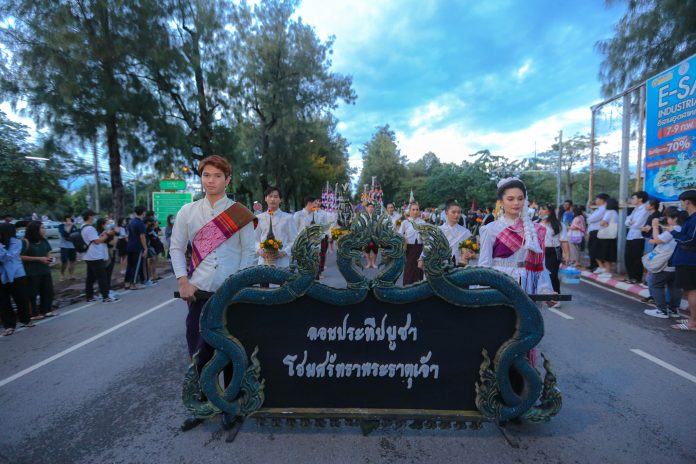 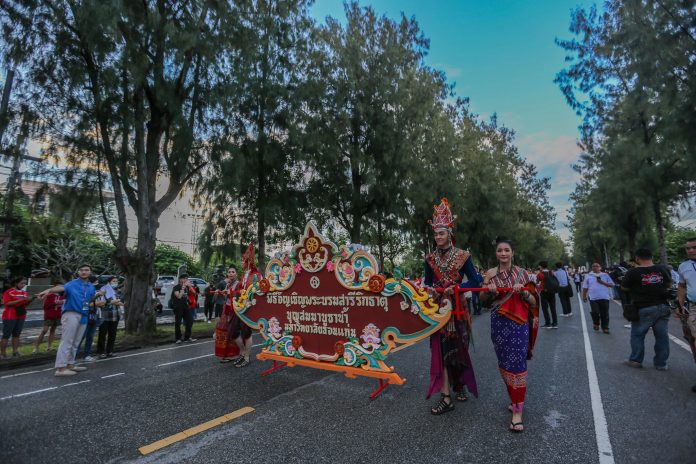 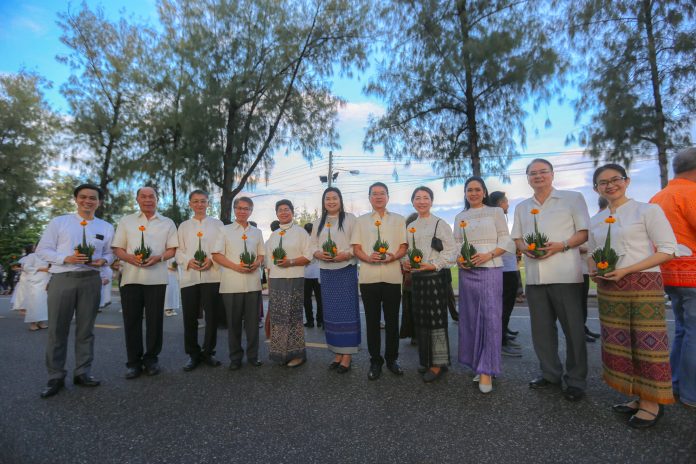 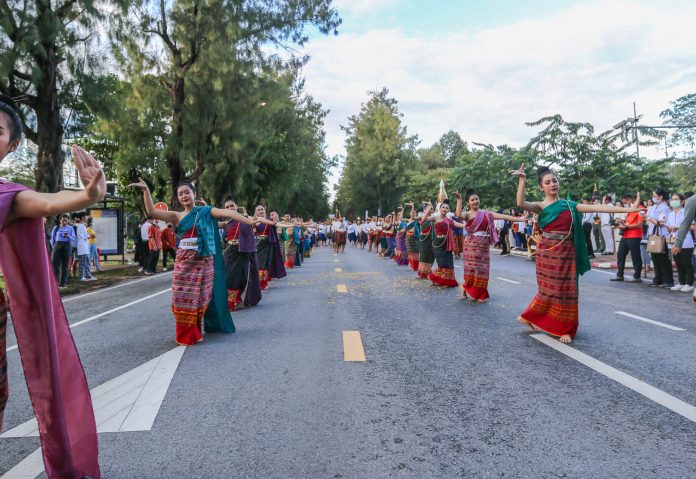 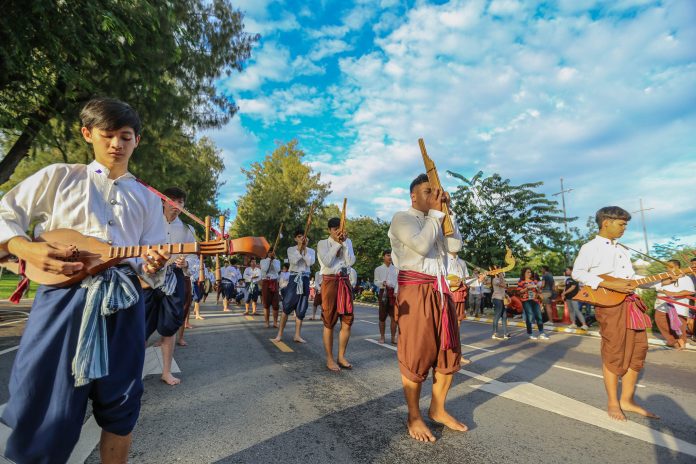 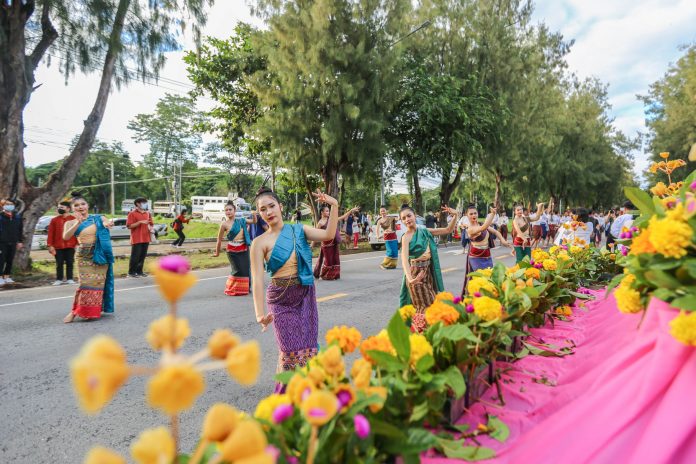 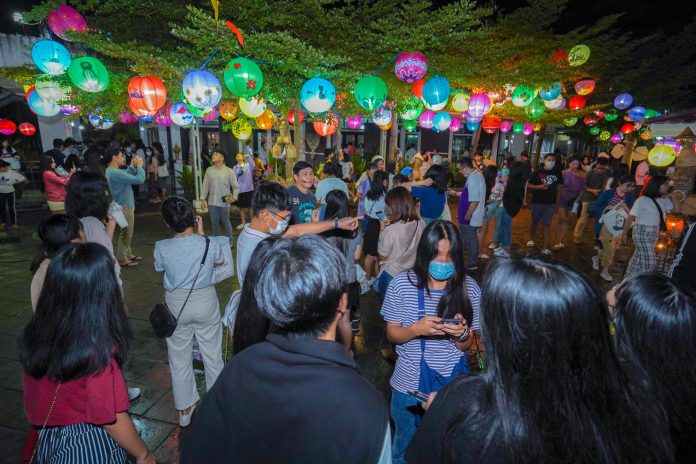 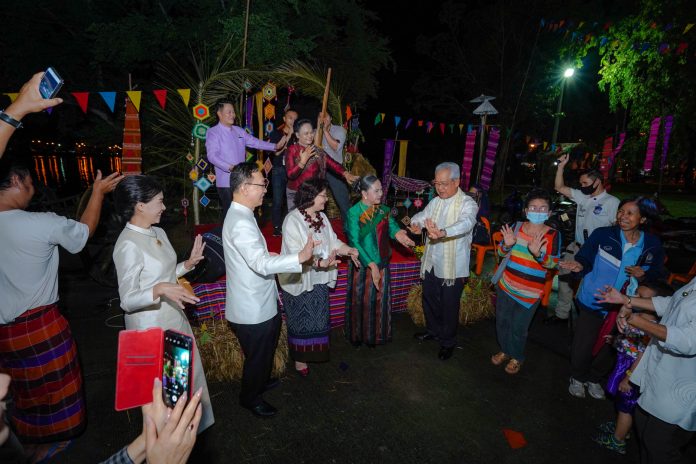 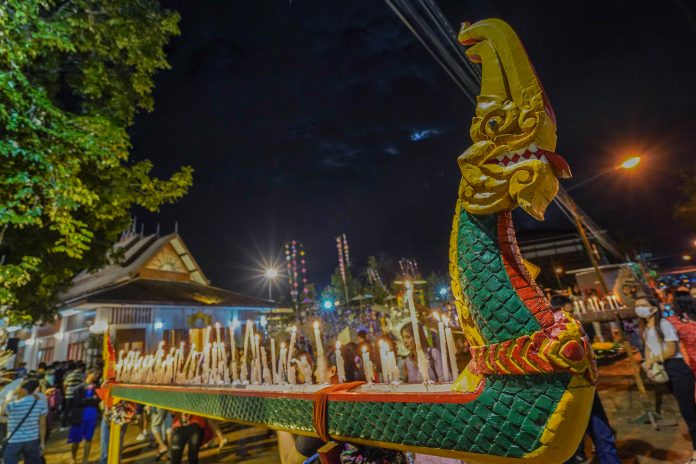 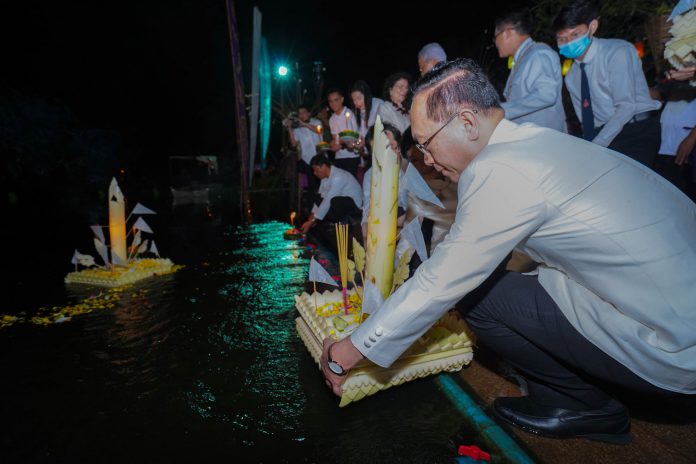 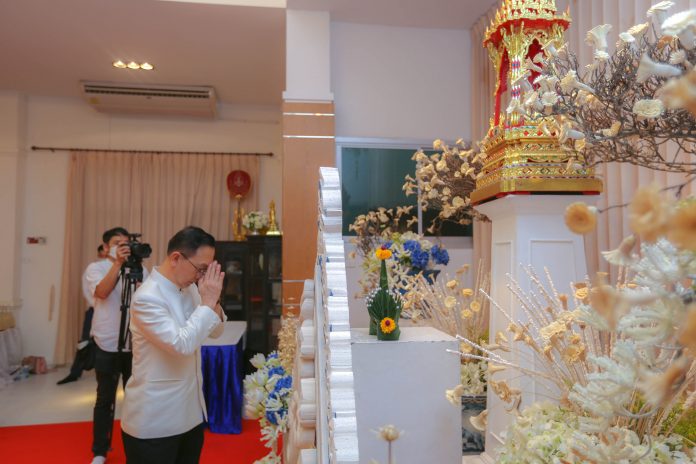 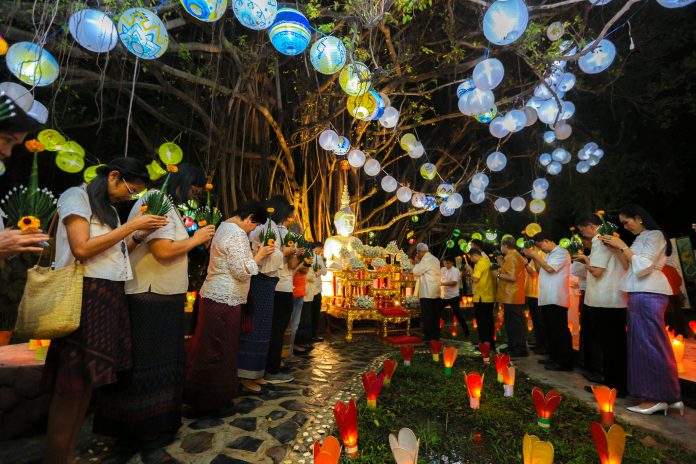 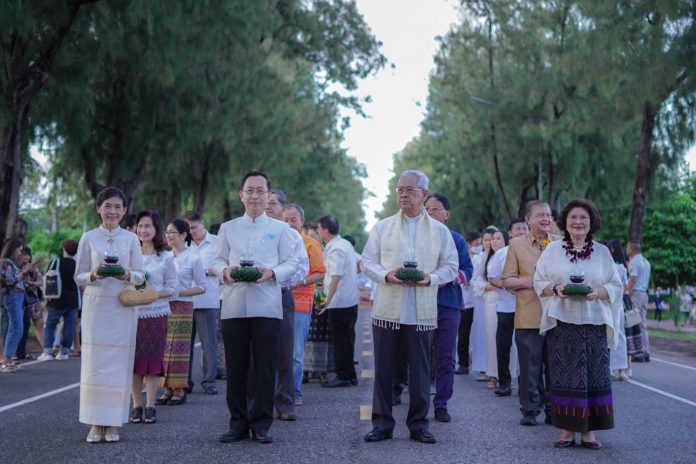 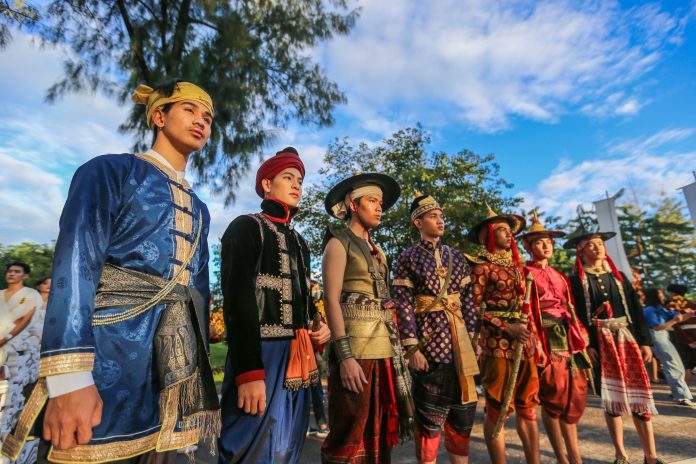 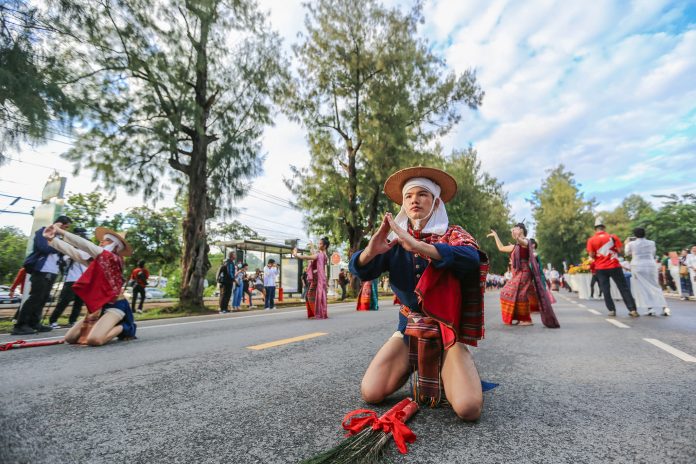 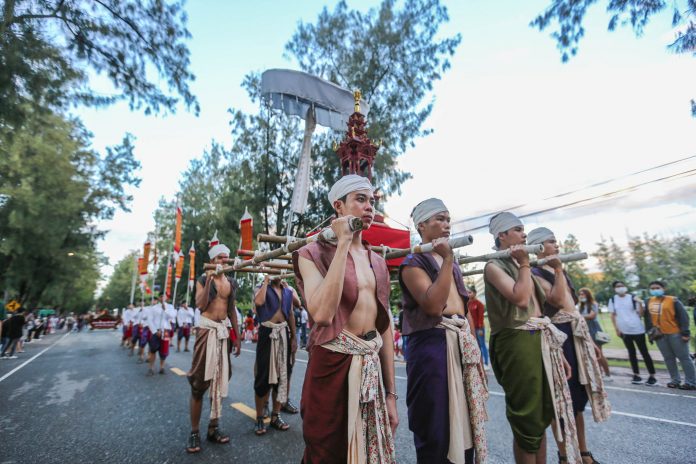 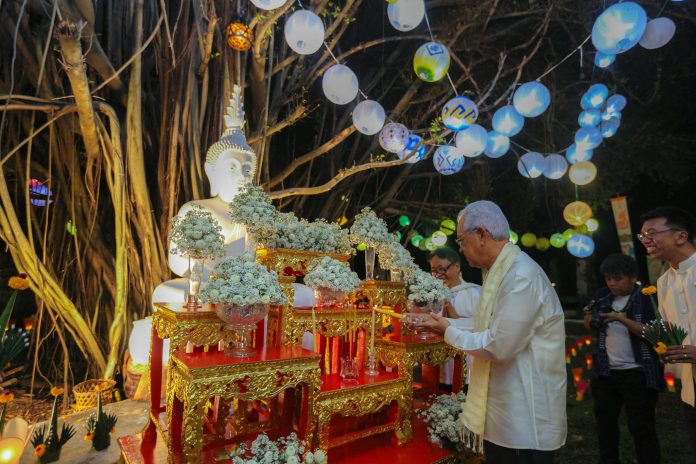