Advisor to Minister of Ministry of Agriculture and Cooperatives appreciates KKU’s progress in edible- insect research – the right direction toward the future!

Friday October 16, 2020, 10:00 a.m. at Sarasin Room, 2nd Floor, Sirikunakorn Building, Office of the President, Khon Kaen University – Assoc. Prof. Charnchai Pathingviriyakul, M.D., President of Khon Kaen University and Mr. Worathat Thuleechan, Khon Kaen Vice Governor welcomed Mr. Alongkorn Pollabutr, Advisor to the Minister of the Ministry of Agriculture and Cooperatives to an official visit under the ministerial policy and the Agritech and Innovation Center’s (AIC) operations in Khon Kaen province. On this occasion, the Minister’s Advisor also had a meeting on the work of AIC with the 4 Roikaensarasin Group, which comprises Kalasin, Khon Kaen, Maha Sarakham, and Roi-et on October 15-16, 2020. Over 100 AIC administration committee members joined.

At 10.00 a.m., Mr. Alongkorn Pollabutr, Advisor to the Minister of the Ministry of Agriculture and Cooperatives arrived at Khon Kaen University and visited the technology and innovation exhibitions of each province involved. The meeting with 100 AIC administration committee members from the 4 provinces then followed, with the Advisor giving the policy for the operation of the Center.

Mr. Worathat Thuleechan, Khon Kaen Vice Governor explained about Khon Kaen’s economic situation. Currently the per capita income is 122,950 baht per person per year. This makes Khon Kaen ranks the first in the Northeast and the 32nd in the country in this regard. The strength of Khon Kaen is the advantage in geo-political location, as the province is in the center of the Me Kong sub-region, the center of governmental administration and services of the Northeast and is on the ASEAN – EWEC economic corridor. Presently, the provincial developmental vision is to be a city pleasant to live, a city that is becoming an innovative city, and a center connecting the Me Kong Sub-region. Various important projects are ongoing to develop Khon Kaen city such as the Smart City and MICE City projects, development of farming occupations that include agronomy, livestock, and fishery, according to the policy of the Ministry of Agriculture and Cooperatives. This agricultural development is aimed towards big-plot farming and organic farming, which will lead the province farmers to become Smart Farmers. In this respect, technologies, local wisdom and good practices based on international principles have been adopted so that the farmers will be proud when they can sustainably rely on themselves.

Assoc. Prof. Charnchai Pathingviriyakul, M.D., President of Khon Kaen University said on behalf of the chairman of the Agritech and Innovation Center (AIC) committee of Khon Kaen and the Roikaensarasin Group that he was pleased to welcome the Advisor to Khon Kaen on the official visit to follow-up work under the Ministry of Agriculture and Cooperatives and to join in the AIC meeting of the 12th official zone in Khon Kaen Province.

“When the Ministerial Advisor came to officially open the Isan Agricultural Fair at Khon Kaen University in January, 2019, you mentioned about the plan to set up AIC in order to strengthen the capacities of farmers using innovations that will bring advances to farming. You have accomplished this in no time. AICs have been founded in all provinces. I really appreciate this very fast advancement. Therefore, your visit today brings moral support to AICs members of all provinces, who will present their operational progress, problems and obstacles in their work. I believe that with the concept and policy of AICs, the benefits will arise to the people and farmers in the region. This is the basis in building Smart Farmers and Young Smart Farmers as well as start-ups that will respond to the governmental policy to make Thailand one of the world leaders in foods,” Assoc. Prof. Charnchai said.

Mr. Alongkorn Pollabutr, Advisor to the Minister of the Ministry of Agriculture and Cooperatives said that the concept behind the founding of the Agritech Innovation Center, which is the collaboration of the 4 allies, namely, the government sector, the private sector, the academic sector, and the farmer sector, is to reform the agricultural sector according to the Agritech Policy 4.0. 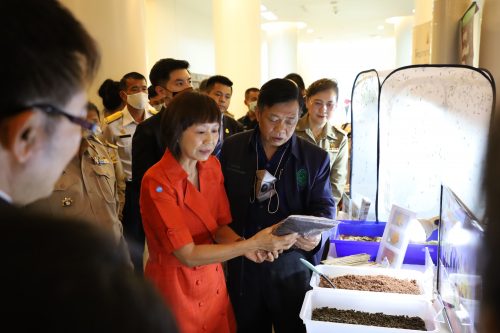 “We must have the mechanism in the area in order to be able to successfully and totally reform agriculture like in China, which was once underdeveloped with their over one thousand population. It is hard to believe that during the past 20 years, China has been able to apply a new economic structure that is the integration between marketing economics and socialism. The engine behind this turnover in China includes technology, basic Chinese wisdom and knowledge. From this, we see the possibility to reform and turn the poor to the rich. The per capita income of Chinese people used to be much lower than ours. But today, China has been ranked the second in terms of economic growth, defeating German and even Japan. The Wall Street Journal in US analyzed that China spent less than 8 years to be at this position. Therefore, we have chosen the right path. We have the principle engine, which is the official units of all ministries and department that are responsible for developing the country. What we need to do now is to add 4 new engines in order to make administration and management fast. The 4 new engines comprise the government sector, the private sector, the academic sector, and the farmer sector, that will learn together and from one another.” 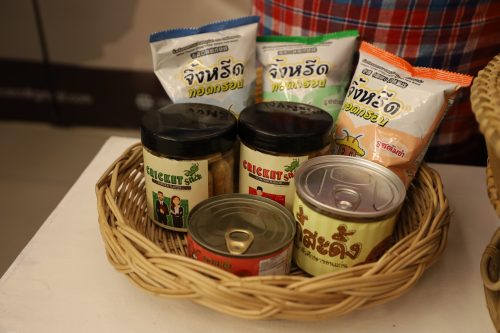 The Advisor to the Minister of the Ministry of Agriculture and Cooperatives appreciated the exhibitions and progress of the projects under the Agritech and Innovation Center (AIC) of the Roikaensarasin Group, especially the industrial insect project of Khon Kaen University, as it answers the wish of the Ministry to make Thailand the Protein Hub of the world, where the protein comes from edible insects.

“As regard the announcement of the Food and Agriculture Organization of the United Nations (FAO) made 2-3 years back that with the quick growth of the world population in the next 15 years, the need for protein from animals will increase at 30%, while meat production at present is inadequate. Therefore, malnutrition will be a big issue. FAO then announced that insects are the world’s most important protein source in the future. Before now, I spent some time looking at the exhibitions, especially the project related to eatable insects or insects that can be eaten by both man and animals. Therefore, KKU’s establishment of Insect Excellence Center is really a great advance, for it answers the future problems.”

Mr. Alongkorn continues to say, “Thailand is the 2nd exporter of foods in Asia after China and is the 11th of the world. Therefore, Thailand is needed by the world. The latest FAO’s report on July 13 this year stated that the World Health Organization publicized that the world is entering the food shortage period. This arises from many factors including the increasing rate of the world’s famine-risk population, which is almost 300 million. This number has been reached in only one year. The burden of our country is therefore not only to climb up the ranks in export and increasing incomes but also to take into account the needy people in the country and in the world who do not have access to foods. What we are able to do is to use technologies and knowledge. AIC is our hope, both for the areas and as the excellence center of the world. The duty of AIC during the first start from June to August and the second stage starting from September is to improve farmers, industries, trading, and consumers under the notion of safe foods. The implementation will make Thailand be among the top ten of the world as the government and the Minister of the Ministry of Agriculture and Cooperatives aim at.”

After the meeting at 13:30 p.m., the Advisor to the Minister of the Ministry of Agriculture and Cooperatives and his team traveled to a community enterprise that farms crickets at Ban Saen Tor, Bua Yai Sub-District, Nampong District, Khon Kaen.